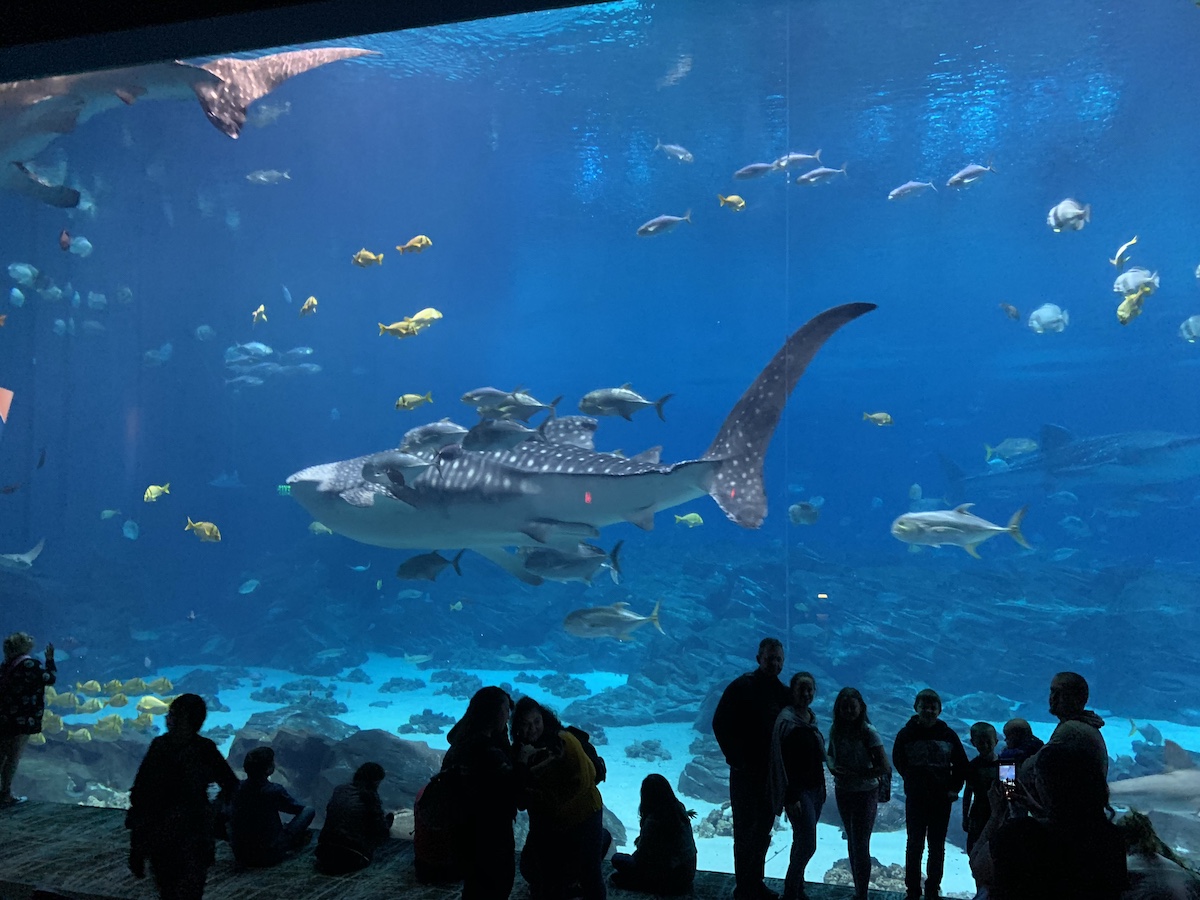 We’re on day 12 since we left our home in Jensen Beach and it was time to hit the road again to get to Chattanooga for Thanksgiving.

You can always trust the weather to get better the day you leave. Today was no exception. The weather was warmer and we had a beautiful blue sky as we drove North into Alabama. The leaves had turned and the colors were spectacular. We took a slight detour to check out a beautiful lake.

We stopped at Arby’s for lunch – which is a fast food joint that specializes in roast beef sandwiches. I got the chicken cordon bleu which was pretty good.

After lunch we drove on to Atlanta. We had originally planned to stop and visit the World of Coca Cola Museum, but it was already closed by the time we got into town, so we went to the Aquarium which is right next door.

We booked online and they had a special price for people just going in the evening. We also booked our parking online which saved us a couple of extra dollars. I had always wanted to go to the Georgia Aquarium as I’d heard a lot of great reviews. I had no idea that it was the biggest Aquarium in the world.

The Aquarium is broken up into different categories which makes it easy to find the exhibits you want to see.

When we arrived they were just getting ready for the final dolphin show at Dolphin Coast. You head upstairs to a massive aquatic arena. If you have ever been to SeaWorld the Dolphin show is kind of similar.

If you want to stay dry don’t sit in the first 10 rows or you will get completely soaked. You’ll learn about how they train the dolphins as well as see some incredible tricks they can perform.

From Dolphin Coast we crossed to the opposite side of the Aquarium and went into Ocean Voyager. This is the main tank of the Georgia Aquarium and in my opinion the most spectacular section.

You’ll head through a glass tunnel. You can choose to walk or to stand on a travellator. You’ll see all kinds of large fish, and then, as you see a massive shadow come over you, realize that there is a Whale Shark swimming directly above you. The shear size of these fish is just mind blowing.

Once at the end of the tunnel you can put your hand in a tank and have it cleaned by these little cleaner crabs. There are also a couple of windows into the large tank as you walk down this corridor but the most amazing view comes as you walk around the corner.

There is a massive glass wall that shows which give you a much fuller view of the Aquarium and the size of the whale sharks as well as some of the massive rays. This Aquarium would have to have the clearest water I have ever seen. It was much clearer than what we had seen the previous week in the Bahamas.

From the warm to the freezing, Cold Water Quest took us to the polar regions to meet Beluga Whales, Sea-lions, and Otters. In this section there is also a touch pool where you can experience what it’s like to touch the different types of starfish.

In River Quest, we got to see a bunch of freshwater animals including baby alligators, mudskippers and alligator gar (which are some of the ugliest fish around). The layout of this section is pretty cool as it feels like you’re walking underneath the river.

Though there are plenty of tropical fish in with the whale shark section, you’ll find more in Tropical Diver, including jellies, sea dragons and angel fish, as well as the many types of coral that the Aquarium grows.

There is a wave tank which showcases a plethora of tropical ocean fish.

Upstairs are a series of labs where you can get a glimpse behind the scenes of the Georgia Aquarium. You’ll see the top sections of the Beluga tank and the main Aquarium and even see the fins of the whale sharks as they circle!

This is definitely an activity worth doing next time you’re in Atlanta. We saw more fish here than we did snorkeling in the Bahamas the week before.

After the Aquarium, we enjoyed some Chic-fil-a and then continued our road trip for a late arrival into Chattanooga. What an action packed day! 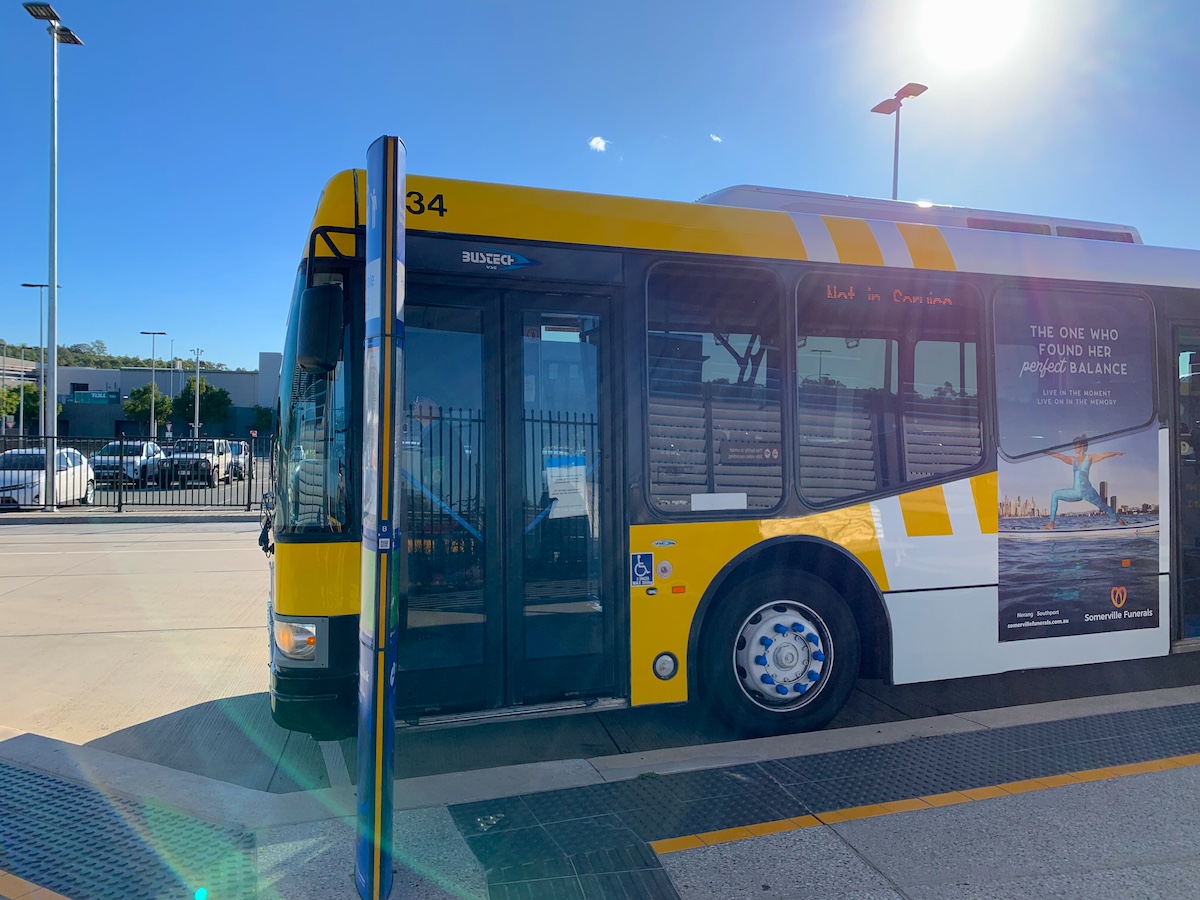 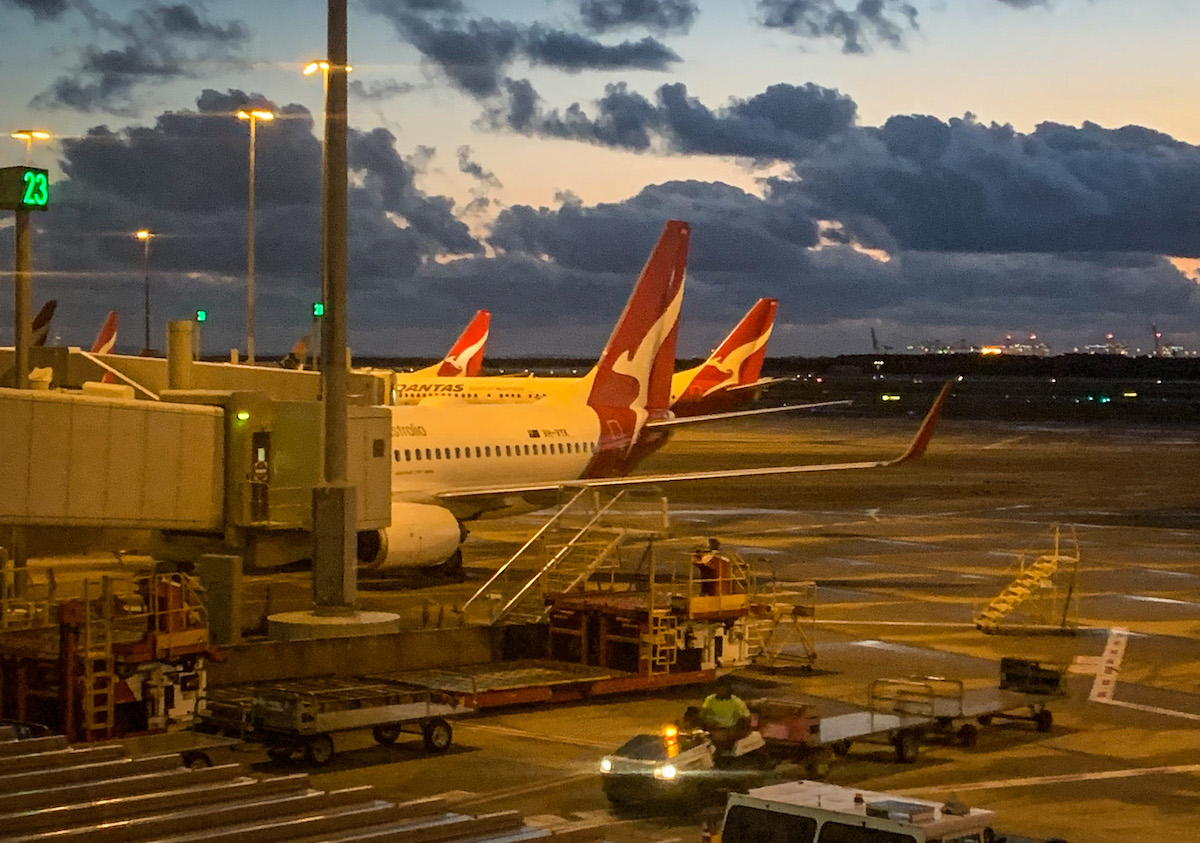 What it’s like flying to Cairns from Brisbane with Qantas 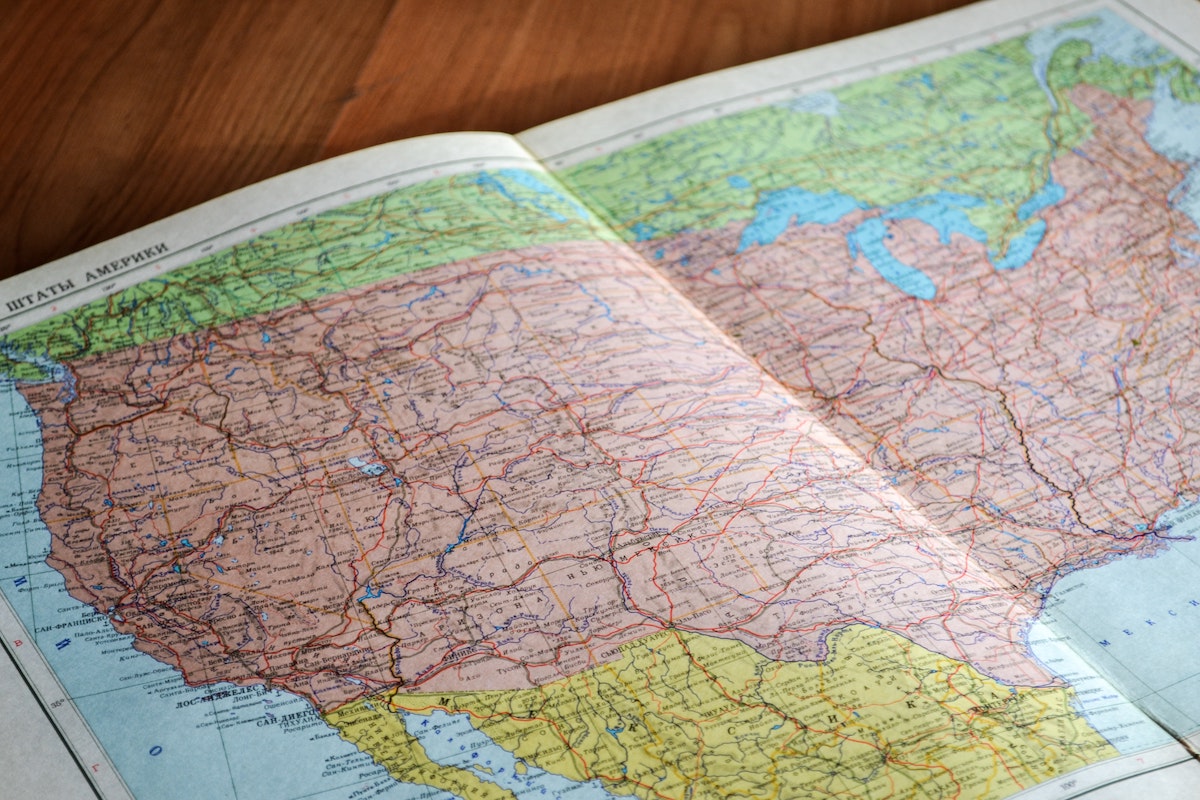 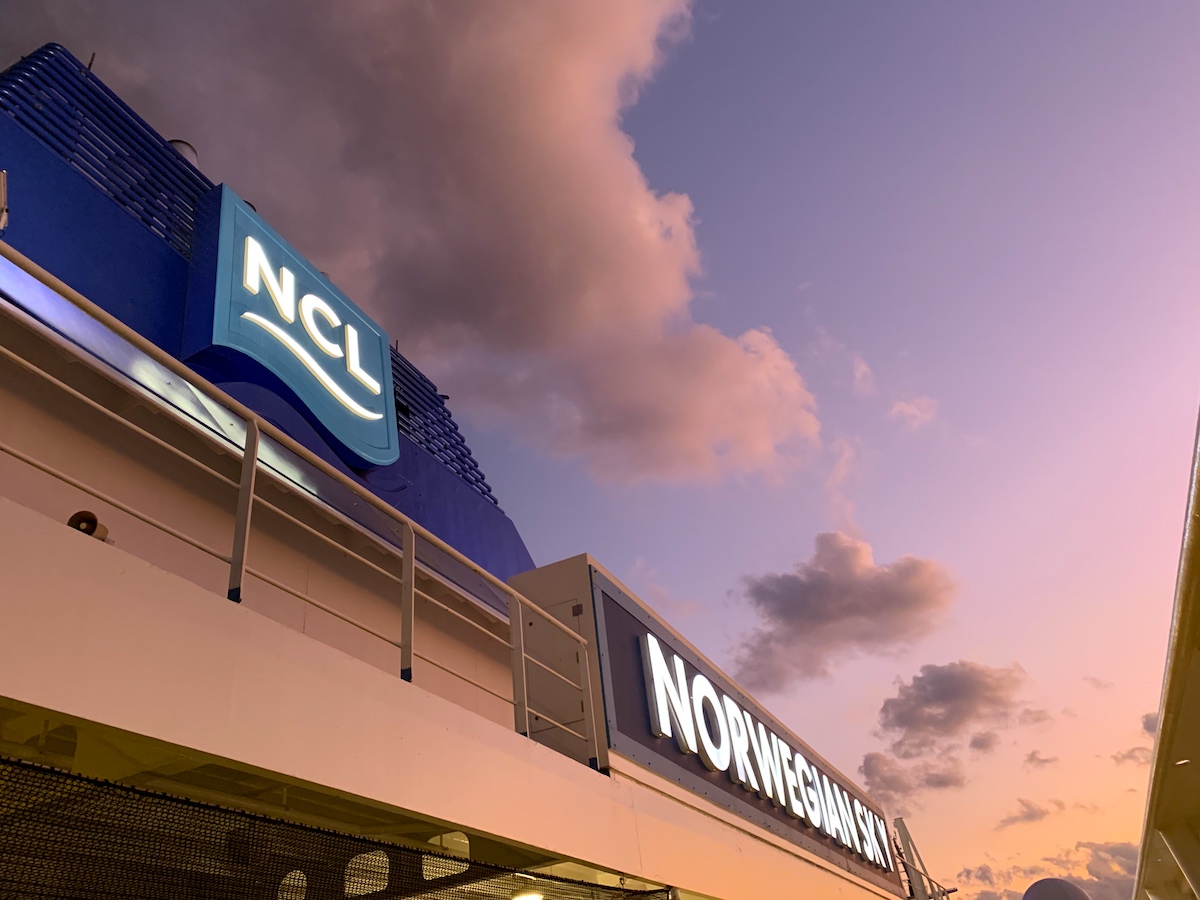